Law is a Family Affair 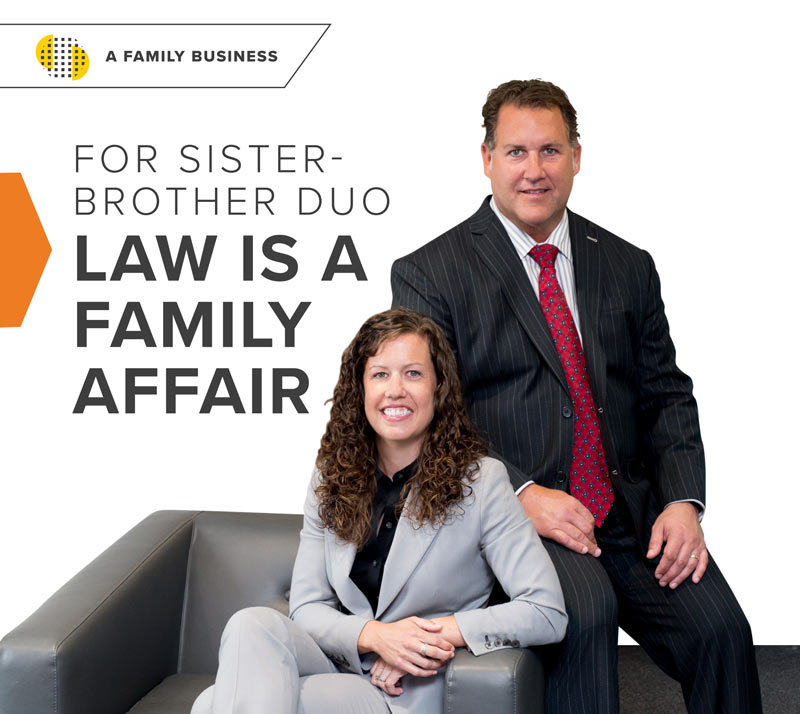 In an interview with the founders of Lawrence Law, LLC, we ex­plore how Kate Lawrence started the firm and how now just eight years later, her brother, Greg, and a former mentor – Mike Lentz – are now her partners in this growing law firm. Kate and Greg shared their personal fascinating professional stories, especially how they eventually became dual partners in a law firm as sister and brother.

ATTORNEYS ARE ALWAYS careful when choosing a law partner for good reason. The reality is that sometimes attorneys spend far more time with their law partners than with family members. Not so with Kate and Greg Lawrence … a sister-brother duo that also share a law practice.

In 2013, Kate started the firm that eventually became Lawrence Law, LLC. Kate was inspired to pursue a legal career after watching her older brother, Greg, practice law. Kate began her legal career working for a large firm that had a focus in the construction industry. Kate and Greg’s father was a purchasing agent at a supply warehouse, and so they grew up around construction. The idea that “the man with dirty boots may be the wealthiest man in the room” was ingrained. Kate has the utmost respect for the construction workers and companies that she represents. Indeed, Kate’s fondest memory of her legal career is landing her first client shortly after she started her solo practice firm in 2013. Now 11 years after graduating from law school, Kate has found herself as the titular head and majority owner of a three-partner law firm. In fact, Lawrence Law is classified as a ”Woman Certified Owned Business.”

Enter Greg, Kate’s brother, 12 years her senior, who started practicing law 21 years ago and whose practice is very different from his sister’s construction law practice. Right out of law school Greg worked for six years as an enforcement attorney at the Securities & Exchange Commission in Washington, D.C. Greg’s fondest memory of practicing law was years later, when he won a high-profile case against the SEC, his former employer. Securities practice is a niche, but Greg has been practicing in this area for 21 years, always focused on the defense of white-collar investigations and Business and Securities litigation.

In 2013, when Kate started the firm, Greg was with an existing boutique firm and had a vibrant practice. In 2019, Greg decided to move on from his existing firm at the same time that Kate was looking at expanding her solo practice. While Kate was on vacation trying to enjoy a little rest and relaxation, Greg called her and floated the idea of the two working together in the same firm, and Lawrence Law became a family-operated business. Make no mistake though: it is clear to anyone who walks through the doors, Kate is the boss. “I always think of her as my little sister, but I will tell you that I have come to admire and respect Katie for her professional abilities and the way she does her job,” Greg says.
The sister and brother make an outstanding team. Both are savvy lawyers, were independently successful, and have unique legal practices. Their combination of skill sets has worked out well for the firm. Lawrence Law operates out of an office in the Warehouse in Camden Yards, overlooking the ballpark. They have added a third partner, Mike Lentz, who is Kate’s former mentor.

Managing any law office is tough and Greg thought it would be significantly difficult with family. However, the two complement each other. They equally share the responsibil­ity of running the firm on a day-to-day basis; however, Kate concentrates on developing and growing the firm. Kate loves having her older brother as a business partner because she is able to make tough decisions with someone that she natural­ly trusts and knows Greg always has her back, and the work doesn’t stop the second they leave the office. They both confess they frequently annoy their family about discussions related to work.

Building a successful law firm is definitely a mara­thon, not a sprint. While Kate and Greg are siblings their partnership almost never came to be. There were reservations on both sides. As lawyers, they both have strong personalities and were concerned about maintaining their loving family relationship. Both were aware that they would spend countless hours working (and arguing) together. Nevertheless, both knew their sum would be greater than their indi­vidual parts. Before proceeding, they hired a business consultant to design the partnership agreement with the goal of structuring the compensation package fairly. The firm continues to utilize the consultant as the need arises. Both agree that the consultant was the key to forming a solid business partnership with each other.

Today, their short- and long-term goals are to build the firm and become a full-service law firm by bringing in talented attorneys who complement the practice and have their own book of business. So far, they have been successful – the firm has grown to three partners with a total of six lawyers in the firm. The firm mainly consists of litigators, but their trans­actional practice is growing. In fact, they are actively seeking lawyers skilled in transactional work. The firm has explored growing geographically and has a New York satellite office. Kate adds that an additional goal of hers is beating Greg at golf.

Kate never expected to be law partners with her older brother and former mentor, but feels especially fortu­nate that both want to work with her. The ease with which Greg and Kate tell their stories and communi­cate is reflective in their practice. They both have an admiration and healthy respect for each other. And even though Kate is the majority partner, Greg adds, “I’m still her big brother.”