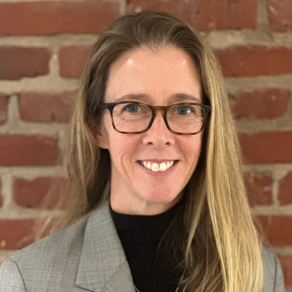 Elizabeth Harlan joined Lawrence Law as Counsel in 2022 and focuses exclusively on employment law. Throughout her 25+ year career, she has advised businesses on employment issues, litigated non-compete and non-disclosure disputes, and negotiated employment-related settlements. She has also taught several seminars and authored multiple papers on employment law matters.

Prior to joining Lawrence Law, Elizabeth practiced employment law for a Baltimore law firm specializing in intellectual property law. While there, she drafted an appellate brief and presented a winning oral argument in the New York Court of Appeals that resulted in a published decision clarifying the difference between employees and independent contractors for purposes of unemployment insurance payments.

Earlier in her career, Elizabeth worked for a Washington, D.C. firm focused on ERISA law, where she litigated multi-employer pension issues. Notably, she first-chaired a winning argument in the Southern District of New York related to the Bernie Madoff scandal.

She began her law practice in San Francisco, working for the litigation department in the local office of a premier international law firm. Prior to that, she clerked for two judges in two separate courts – one in Washington, D.C., and the other in California. Elizabeth is a graduate of the University of California Hastings College of the Law.